In the following list are grouped characteristics of each family of antibiotics, indications, major adverse events, cons-indications.

Aminoglycosides. Including inter alia streptomycin (used against tuberculosis) and gentamicin, are effective antibiotics against urinary tract infections and severe intestinal. Their toxicity is primarily auditory and renal (kidney and ear). Their main indications are cons-anesthesia, renal failure, pregnancy.

The TB with ethambutol have liver toxicity, neurological and ocular (liver, nervous system and eyes). They are cons-indicated during pregnancy and in patients with impaired liver or kidney. Rifampicin and streptomycin are among TB. They are related drugs in the treatment of tuberculosis, but having a toxicity level of the ear, liver, kidneys, digestive system, and are also likely to cause allergic reactions. They are cons-indicated in cases of anesthesia, renal failure in infants, during pregnancy and in cases of allergy to these drugs.

The beta-lactam 2 include first generation cephalosporins with cefaclor, céfapirine, cefazolin. They have indicated anti-infectious very broad similar to penicillins. The second and third generations are reserved for hospital care and severe infections. The main side effects are allergic reactions associated with hemorrhage. 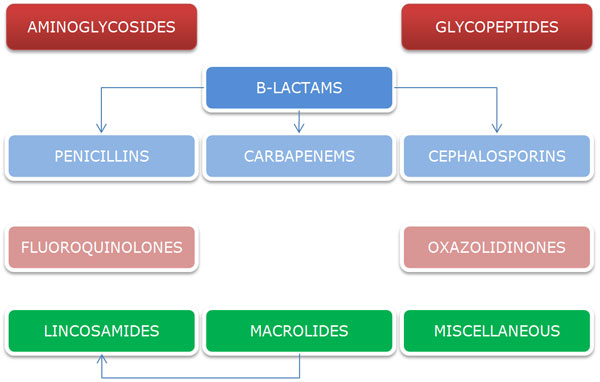 The lincosanides. Including clindamycin part, are reserved for certain serious conditions, but have a digestive and liver toxicity. The main cons-lincosanides is an indication of liver failure.

Macrolides. With erythromycin and josamycin are the common drugs indicated mainly in case of genital infection, ear, nose and throat, lung and for infringement by toxoplasmosis. The main side effects are allergic reactions and liver toxicity and gastrointestinal. The main cons-indication is liver failure.

Nitroimidazoles. Including metronidazole, are shown in secondary infections with anaerobic bacteria, that is to say, can live without oxygen. The main side effect is gastrointestinal fragility. The main indication is cons-allergy medication.

The phénocolés. Including the tiamphénicol, have indications in severe disease and failure of other antibiotics. However, their major side effects were gastrointestinal toxicity and blood. They are cons-indicated in pregnancy, infants and liver disease.

The polypeptides. Which colistin belongs, have entries in the urinary infections. Their main side effects are toxic to the nervous system and kidneys. The main indications are cons-anesthesia and renal failure.

Quinolones. With acid and nalidixic acid pipemidic are listed in the urinary and genital infections. Beware of allergic reactions. On the other hand, they have some toxicity hearing (inner ear). They are mainly cons-indicated in cases of epilepsy in some psychiatric illnesses during pregnancy and infant.

The rifamycins. With rifamycin used mainly topical, may cause allergic reactions. Rifampicin is also part of this class of antibiotics, it is used against tuberculosis, but it has a toxic digestive and liver. On the other hand, it is cons-indicated in infants.

Sulfonamides. Which may or not be associated with trimethoprim, which is part sulfadiazine and sulfamethoxazole, used in some congenital urinary tract infections but also in case of failure of other antibiotics. The main side effects and adverse reactions are allergies and toxicity in the blood and kidneys. Their main indications are cons-renal failure, pregnancy, infant.

The synergistins. Including pristinamycin and virginiamycin are part, are shown in skin infections, lung and bone. Their toxicity is mainly gastrointestinal and liver. The main cons-indication is liver failure.

Tetracyclines. With doxycycline, minocycline and tetracycline are common drugs primarily indicated in genital infections, cholera, typhus, lung ailments. The main side effects are allergic reactions, as well as neurological toxicity, renal and gastrointestinal. The main cons-indications are the children for eight years, severe liver or kidney.

Various antibiotics. Including fusidic acid, vancomycin, fosfomycin and teicoplanin, are reserved to the hospital for staph infections and other severe infections. Their toxicity is in the inner ear and kidney. The main indications are cons-allergy and liver failure.